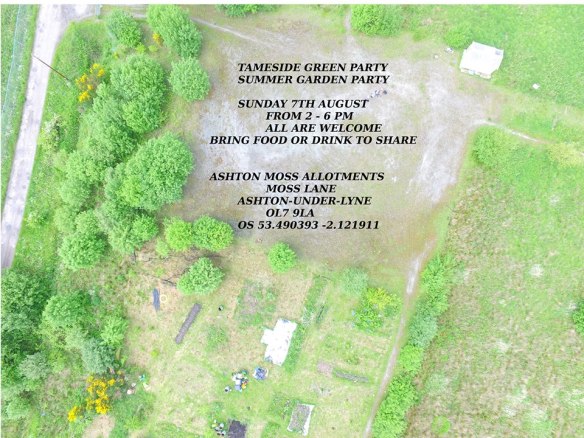 This year our Summer Garden Party will be held on Sunday 6th August, 2 – 6 pm.

All are welcome, there is no cost, you may want to bring food or drink to share.
There will be Food, drink music and lots of information about campaigns and issues local and global, also our Tameside Green Party Bring and buy sale

Ostensibly, devolution seems like a good thing, a chance for an area to become autonomous, no longer subject to the hostile whims of Westminster, free to chart its own destiny and define itself on its own terms; but scrutinise the DevoManc deal and you’ll see that Osborne’s much touted ‘Northern Powerhouse’ is more like a ‘Mancunian Workhouse’ offering about as much freedom to Greater Manchester as a choke lead does to an errant dog, and Osborne has wasted no time tightening the lead. 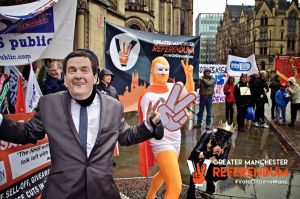 Campaigners for a Referendum on DevoManc take to the streets

“Responsibility for a devolved and consolidated transport budget, with a multi-year settlement” clearly seemed like a good idea at the time to the ten, mainly Labour, council leaders who rushed off behind closed doors to sign the DevoManc deal with George Osborne, without the merest whiff of public oversight. Unfortunately, like people about to be taken in by a payday loan lender, they forgot to heed the small print: that the deal is “subject to future Spending Review”.

The Chancellor’s post-election ’emergency budget’ just so happens to assure that every single ‘freedom’ Osborne had bestowed on Greater Manchester was precisely where he was making the most brutal cuts: transport, further education and business and skills.

Now Council leaders’ opportunity to build a Greater Manchester integrated transport system to rival London’s winning Transport for London has been severely impeded by Osborne hacking £545 million off the national transport budget, and devolved powers to “shape and re-structure the further education provision” and design business skills provision have both been hit by a £450 million national shortfall. Bad news for apprenticeship schemes in an area with some of the highest youth employment in the country.

What was sold as an opportunity to protect Greater Manchester from Westminster cuts seems, in the cold light of day, to be nothing more than having further responsibility for passing them down. With no opportunity to raise taxes, only an an ‘earnback scheme’ posited on narrow national growth targets, and subject to sanction if they’re not met, Tory-led Westminster are still calling the tune and Labour Council Heads are far too keen to dance to it, particularly when one of the dubious privileges they’ve been awarded is to co-commission the Workfare programme – playing Fagin to Osbourne’s Scrooge.

In an area where both Tameside and Wigan councils have volunteered to subject the most vulnerable members of their boroughs to the vagaries of Universal Credit and Troubled Families pilot schemes, alongside zealously enforcing the government sanction regime, the karmic irony can’t be lost on people that when Council Leaders are inevitably forced to go to Osborne begging bowl in hand to ask “Please Sir, can we have some more?” The answer, to the detriment of us all, will inevitably be, “No.”

Denton and Reddish Parliamentary Candidate, Nicholas Koopman, on why we should renationalise the railways

It is just over twenty years since THAT fateful decision: the 1993 Railways Act privatised British Rail and replaced it with National Rail. John Major’s government promised much for the commuter: more flexibility, reduced fares, improved investment, and greater efficiency. All this would be brought about, he argued, through increasing competition with the introduction of the franchise system, allowing the Conservatives to sell off another state asset in their quest for a minimal state.

Fast forward twenty years and the picture is in diametric opposition to that Major envisioned: fares have increased dramatically for certain tickets, standard single tickets being a good example, and the overall cost of maintaining the railways has almost doubled.

Multiple private monopolies have replaced the government run system. These are put out to tender, at considerable cost to the taxpayer, and often to foreign governments. The ‘winner’ is awarded the contract for up to fifteen years, which means that there is limited competition between those tendering thus no internal pressure on prices. Millions of pounds of taxpayers’ money subsidise these companies in order to merely to provide a basic service. This is well evidenced in the case of Northern Rail, who collected £707 million subsidy and premium.

Wait, I hear you say, surely with the increased fairs and subsidy there must be improved investment? Well, although some development has taken place, it hasn’t been enough to satisfy demand. Trains are dangerously overcrowded; there is often little chance of obtaining a seat on peak journeys on trains more suited to the railway system of the 1970s than the 21st Century. The Hadfield crash, in 2000, uncovered the lack of investment in the railways infrastructure by Railtrack, which has now been taken back under state control. 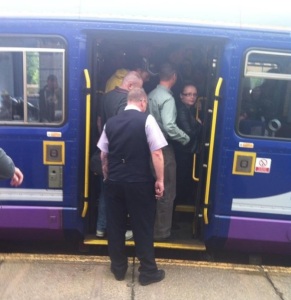 The most galling aspect of our current aspect of our ‘franchised’ privatised rail system is the involvement of the foreign state control of our railways: three quarters of our railways are now in ‘foreign’ hands: three quarters! This means that shareholder profits from ‘our’ railways go into improving or reducing fares for citizens in other countries such as Germany or the Netherlands.

Is there a better way? We have a system that is already operating and returning more than two hundred million pounds to the treasury: the state operated East Coast mainline. Moreover, this state owned service received substantially less in subsidies; more people travelling; and increases across all levels of customer satisfaction. This proves that state owned railways can be efficient even when they are ‘the people’s railways’.

Yet, despite all this evidence, this Conservative Government plans to rush through a re-privatisation before the next election: one has to ask why, when it isn’t to increase efficiency or save money.

The Green Party proposes that public ownership of the railways would not only enhance our current infrastructure, but would also save one billion pounds a year of taxpayers’ money. Savings can then be invested in improved additional stock and the railway infrastructure, improving the service for passengers and reducing the overcrowding, thereby encouraging more people to travel on public transport. It would also mean the end of inflation busting prices rises for commuters while shareholders take increasingly more profits. What is more, this could be done at very little cost to the taxpayer: unlike Labour’s proposed plan of state bids for franchises. Current franchises could be taken under into public hands as they expire.

The time has come for another approach: the ‘people’s railway’ must return.