Sixty people, most of them Africans, protested against Nigeria’s draconian new anti-gay law outside the Nigerian High Commission in London, Thursday 20 February.The rally was organised by Nigerian LGBTIs in Diaspora Against Anti Same Sex Laws , with the support of the Peter Tatchell Foundation and the African LGBTI Out and Proud Diamond Group.

A letter of protest was handed in to the Nigerian High Commissioner. Protesters chanted: “Goodluck is bad luck” and “Some people are gay, get over it.” In personal defiance of the homophobic law, Nigerian lesbian, gay, bisexual, transgender and inter-sex (LGBTI) people in the crowd kissed and held hands.

The Same Sex Marriage (Prohibition) Act was signed into law by President Goodluck Jonathan in January. It is much more sweeping than merely banning same-sex marriage.

“This new law bans LGBTI advocacy and events, with a 10 year jail term for violators. Public representations of same-sex relationships in leaflets, books, plays or films carry the same penalty, as does witnessing or assisting a same-sex marriage or civil union. Kissing or holding hands in a public place, and even the mere fact of being openly gay, is now a potentially serious crime for LGBTI people in Nigeria,” said Peter Tatchell, Director of the human rights organisation, the Peter Tatchell Foundation. 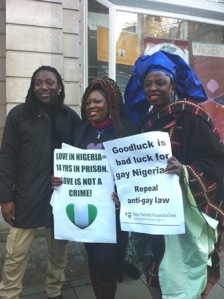 “The new law violates the equality and non-discrimination guarantees of Article 42 of the Nigerian Constitution and Articles 2 and 3 of the African Charter on Human and People’s Rights, which Nigeria has signed and pledged to uphold,” said Mr Tatchell.

“We came together to say ‘No’ to this atrocious law and its blatant violation of our human rights,” said rally co-organiser Yemisi Ilesanmi. “This legislation is a clear attempt to crush the LGBTI community in
Nigeria. It will jail Nigerians who participate in LGBTI organisations and will make human rights advocacy by LGBTI groups impossible.

“Nigeria is sliding fast into a despotic state. The law further criminalises same-sex relationships. Already, consensual same-sex conduct between adults is a criminal offence carrying up to 14 years imprisonment. In some parts of the country there is the death penalty under Sharia law,” said Ms Ilesanmi. 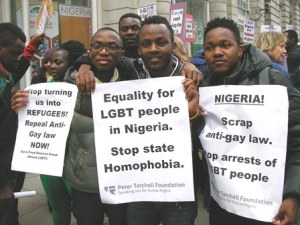 “Valentine’s Day is in February. In the spirit of love that February is famous for, we held a kissing spree outside the High Commission. Our message was: Yes to Love and No to Hate,” added rally co-organiser Davis Mac-Iyalla. “We kissed goodbye to sodomy laws and other anti-same-sex laws. International LGBTI solidarity knows no borders.

“The Nigerian government has demonstrated discrimination and oppression towards vulnerable LGBTI Nigerians. It is ignorant of human sexuality. The legislators are enforcing their religious beliefs in a secular country. Equality and human rights are for all, including Nigerian LGBTIs,” said Mr Mac-Iyalla

Edwin Sesange of the African LGBTI Out and Proud Diamond Group added: “We are protesting to show our solidarity and to give hope to our LGBTI brothers and sisters in Nigeria. President Goodluck Jonathan should criminalise hate not love. It is very unfortunate that he has ignored pleas for him to scrap the colonial-era anti-gay law and introduce this additional criminalisation of LGBTI people.

“It is important for us Africans to stand together during these times of oppression by our own leaders. We call on everyone to join us in the struggle for LGBTI equality in Nigeria and Africa,” said Mr Sesange.